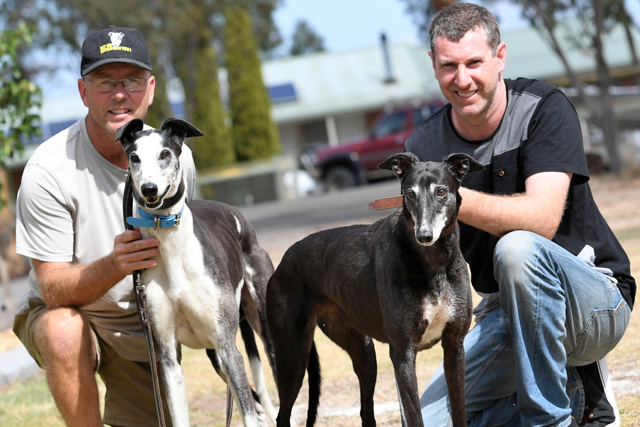 
Ten years after fighting out the finish of the Group 2 Macey’s Bistro Warrnambool Classic Deception Bay and Cash Express are still enjoying a life of luxury with trainers James Sayle and Jeff Britton.

Sayle celebrated his greatest moment in greyhound racing when his homebred speedster Deception Bay led throughout in the 2007 Classic, with a chance meeting leading to her recent re-acquaintance with runner-up Cash Express (pictured above).

“I met Angela Langton at Geelong and asked if I would be able to work some pups of mine up the straight at Angela and Jeff Britton’s place,” Sayle explained.

“Winning the Classic was a once-in-a-lifetime experience and because it was such a memorable race when I pulled up in Angela and Jeff’s driveway I saw a dog that looked like Cash Express in the backyard. Cash Express had very distinctive markings and when I asked Jeff who the dog was he said it was Cash Express. I couldn’t believe it after all these years.” While it may have been a decade ago now, not surprisingly Sayle vividly recalls Deception Bay’s all-the-way Classic triumph over Cash Express, which went on to enjoy Group success as a stayer.

“It was ten years ago now but it was one of those things you never really forget,” Sayle said.

“Deception Bay was just under two at the time but she was going alright and she was paid up for the Classic so we decided to put her in and see what happened and she came out and won her heat and broke one of Brett Lee’s sectional records.

“I can still picture the final in my mind. Deception Bay had the one box. She’d never drawn box one before so she drew it at the right time. Jimmy Auld had the dog in box two, Proven Swag, and it gave her plenty of room. When she got through the first turn in front I just started running to the catching pen, I was that excited!

“I’m only a hobby trainer but I was treated like royalty that night. It was very satisfying because I raced her mother Mandalay Bay as well and bred the litter. We bred Deception Bay, reared her, broke her in and pre-trained her. We did everything with her.”

After winning 20 of her 40 starts, Deception Bay produced four litters in the breeding barn, but life now is all about the couch for the 12-year-old.

“Coco will probably be sitting on the couch while we’re speaking,” Sayle said.

“I’ve got a dog door and she comes in and out of the house as she pleases. She just does her own thing. She loves lying on her back on the lounge with her legs in the air, which is funny because her mother used to do exactly the same thing, but Coco never would’ve seen her mother do it.”