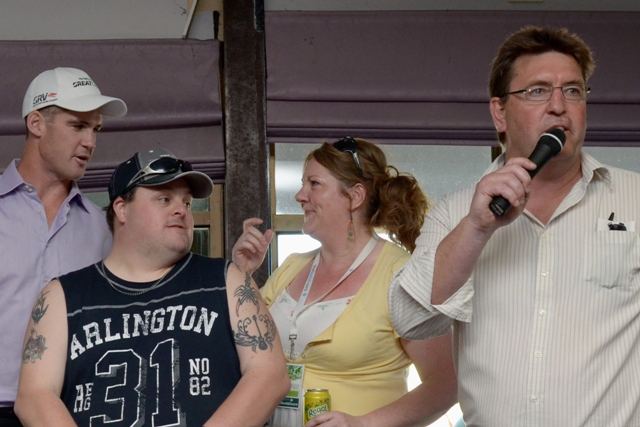 Classic Chance to Back Your Breed


There’s big news emanating out of the Warrnambool Greyhound Racing Club – Matt Ansell has returned to the fold as Manager and one of his first missions is to help drive nominations for the 2017 Warrnambool Classic before the newly set deadline of November 30, 2015.

Ansell (pictured above right with Jonathan Brown at Warrnambool’s 2011 TAB Great Chase heats) resumes the role – albeit in a temporary capacity – following the resignation of Michael Cottee, who has accepted a position as CEO at the Rockhampton Turf Club.

Ansell, 51, managed the Warrnambool GRC from 2006-2012 during which time he oversaw a multimillion dollar redevelopment of Wannon Park racetrack and helped the club stamp its footprint in the local community by drawing large crowds to events including its May Racing Carnival, Christmas Seaside Carnival and the TAB Great Chase series.

2017 Warrnambool Classic nominations have been extended to the end of this month – providing greyhounds with the chance to win prize money during the heats and semi-finals as well as share in a whopping $106,500 in the final (first prize $75,000).

‘Nominations for the 2017 Warrnambool Classic close on November 30, with that particular series to be the first in which the club will host extra bonus races for Classic-nominated greyhounds’

“The club has never held bonus races for the Warrnambool Classic before, so there is more incentive than ever for people to nominate their greyhounds for the series,” Umbers said.

Fiona said the result of the 2015 Warrnambool Classic was the perfect example of why breeders and owners should nominate their pups for the 2017 series and beyond.

“You look at this year’s winner, Nunya Tron, who is trained by Simon Barker. I hadn’t even heard of Simon Barker prior to that race – and I don’t mean that with any disrespect – but there he was winning the $75,000 first prize with what was the only dog he trains.”

“That shows that the Classic is a race that can be won by anyone, not just the big name breeders and trainers.”

“The (Warrnambool) Classic provides the perfect opportunity for people to back in their breed from a young age for the chance to win some serious dollars,” Umbers said.