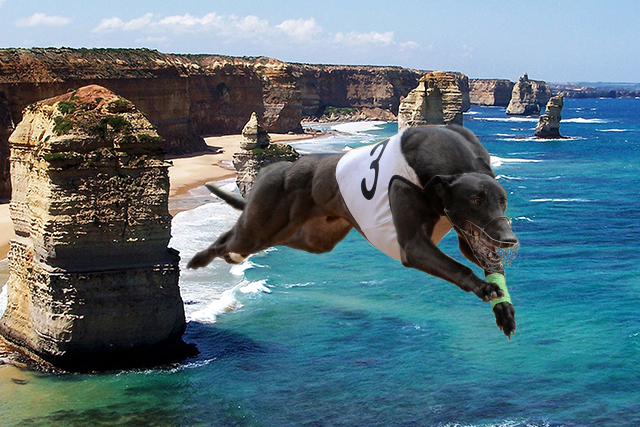 
Young local trainer Dustin Drew is adopting a “sink or swim” approach to Wednesday night’s heats of the Group 2 Warrnambool Cup with his lightly-raced but very promising sprinter Lonesome Boy.

Lonesome Boy – an aptly named member of a one-pup litter by US sire Lonesome Cry out of 2006 Melbourne Cup heroine Betty’s Angel – will be starting for just the sixth time when he contests the cut-throat Warrnambool Cup heats.

While Lonesome Boy has created a big impression in winning three from five – with each of his victories coming at his home track – 30-year-old Dennington-based Dustin Drew concedes he’s throwing his exciting rookie in at the deep end.

“I wouldn’t usually do it but this dog is just so quick,” Drew said.

“He’s got a bit of age (whelped October 2012) but I’ve had a lot of trouble with him. He had an operation on a sesamoid and it took a while to get it right but I’ve just taken my time with him.

“To be honest he probably can’t win his heat. Dawkins Bale (1) ran second in the Golden Easter Egg and Armed And Ready (2) and Gracas King (3) both have good form but at the end of the day you can’t win sitting at home in your kennel so we’ll see what happens. He’ll either sink or he’ll swim!

“He’s definitely got the ability – I wouldn’t have put him in otherwise – but he’s going to need an awful lot of luck, especially after drawing box six with so much speed underneath him.”

Lonesome Boy’s awkward alley in the third heat is a major concern for Drew and it’s the same story with his second Cup contender, Fratelli Fresh, which will exit box five in the second heat, where last start Queensland Derby winner Dyna Villa has drawn the rails.

“Fratelli Fresh is a good bitch. She’s won 14 from 29 and she’s won in three different states but she’s probably three or four lengths behind the really good dogs,” Drew said.

“If she’d drawn inside I would’ve said she was right in the race but she meets Dyna Villa off the red and it’s almost impossible to see him getting beaten.

“Before the box draws I thought I had two dogs with some chance but boxes are everything in these races and they’re both going to need a lot of luck now.”