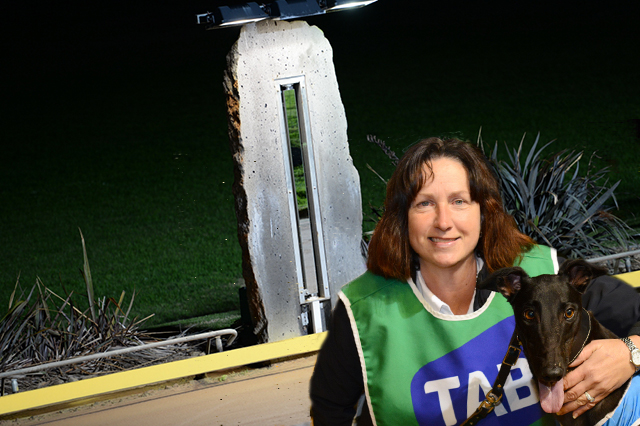 
Angela Langton’s love affair with the Macey’s Bistro Warrnambool Classic looks set to continue after her superbly bred youngster Shared Equity was the standout performer in the heats of the lucrative Group 2 feature, held on Tuesday and Wednesday nights.

Langton has a remarkable record in the Classic, in which connections pay a nomination fee for their pups at a tender age, boasting three victories courtesy of Auf Wiedersehen (2006), Lynlea’s King (2008) and Premier Event (2013).

And the successful Anakie mentor has her sights firmly set on Classic number four after blueblood Shared Equity set Warrnambool alight with a near-record heat victory on Tuesday.

There’s no better bred greyhound in the land than Shared Equity, a daughter of the great Brett Lee and West On Bluebird, a Bombastic Shiraz x Winsome Bluebird litter sister to former champion stayer Miata.

It’s only early days but Shared Equity is living up to her regal bloodlines, securing her sixth straight victory and seventh from 12 overall on Tuesday when downing the classy Dewana Result in a scorching 24.87sec, just .04 outside Phenomenal’s 450m course record. Replay

“I thought it was definitely the hardest heat so I was really pleased she got through,” Angela Langton said.

“She had a bit of an injury earlier on and it took a while to get her going but she’s really hit her straps and she’s started to begin, which is even better. She’s only young but she’s a good little chaser and she’s strong too so she can do it at both ends.

“I was really pleased with her time because I didn’t think she’d run sub-25 but she’s improving all the time. I didn’t expect her to begin as well as she did; she broke the first split record (6.36sec) and she was only a length off the record.”

Shared Equity’s prospects in the $75,000 to-the-winner Classic were further enhanced when she drew box one for the semi-finals, to be held on Wednesday along with heats of the Group 2 Warrnambool Cup on a bumper night of racing.

Langton will also have Black Illusion, a 25.32sec heat winner, and heat placegetter Weston East engaged in the semis, while she also races semi-finalists Weather Whatever and African Storm, which are trained by Jason Thomson and Clinton Capuano respectively.

“She’s racing with a lot of confidence so hopefully she’ll keep improving and doing every right.

“I think the Classic is a great concept and I’ve been lucky enough to have had a lot of success in it. It’s not overly expensive so I sit down each year and write down a list of my pups and try to nominate about 20 at the older end of the age eligibility.”

Twelve heats were held on Tuesday and a further seven on Wednesday, with Jason Thompson’s Exuberant the only other heat winner to break 25 seconds, clocking 24.95sec on Tuesday.

The fastest performance on Wednesday evening came from the Kelly Bravo-trained What’s Chewing, which posted 25.08sec.
.