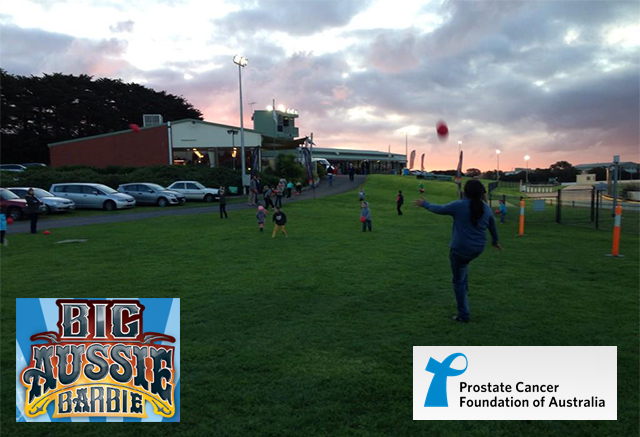 Each of Victoria’s greyhound race clubs is hosting a Big Aussie Barbie during a race meeting throughout September or October to help raise awareness about prostate cancer.

“The Warrnambool community has a reputation of supporting worthwhile causes such as this,” said Warrnambool Greyhound Racing Club President Phil Mitchem.

“Our dining area was booked out with people enjoying a $10 gourmet barbeque platter to help raise funds for the Prostate Cancer Foundation of Australia (PCFA).”

Every kid on course received a free footy on arrival while dads received a voucher for a free pot of beer. Further, Sherrin footballs signed by the likes of Jonathan Brown, Jordan Lewis and the North Melbourne Football Club were raffled off to help raise $2,500 for the Prostate Cancer Foundation of Australia on the night.

Mitchem said the night was a huge success, not only for the PCFA but also for Warrnambool greyhound racing.

“I usually know pretty much everyone that comes to our track on race nights, but looking around tonight I hardly know any of these people. A lot of them are first time racegoers which is a huge bonus for our club,” Mitchem said.

“We advertised in the Warrnambool Standard Newspaper and on local radio, and being AFL grand final week we have a football theme and people are loving it.”

PCFA State Regional Manager John Strachan has travelled the countryside attending greyhound racing’s Big Aussie Barbie’s in recent weeks, and he offered some words of advice for patrons when interviewed by MC and local radio presenter, Matt Stewart at Warrnambool.

“A lot of people don’t realise that prostate cancer kills more men than breast cancer kills women, and in most cases early detection is the key to overcoming it,” Strachan said.

“The simplest and easiest way to detect prostate cancer is by way of a blood test, and the PCFA urges all men to have an annual blood test from the age of 50.”

“That said, if you have a family history of prostate cancer, we recommend that you have a yearly blood test from the age of 40.”

“And while we are targeting men with our messaging, there are a lot of women here tonight who I’d also like to encourage their fathers, their brothers, their sons and their nephews to go and get a blood test.”

Meanwhile, cricket fans can meet Aussie paceman James Pattinson at The Meadows next Saturday night (October 4), which will be the last of greyhound racing’s Big Aussie Barbies for 2014.